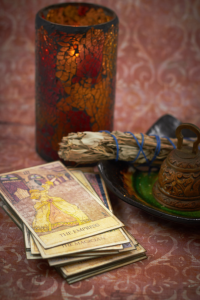 I’m known around Los Angeles as a magician and theatrical Séance Medium, but on occasion (and when the price is right) I read Tarot cards, too.  Have I made a pact with the Devil?  Are tarot cards EVIL?  Do I actually believe in them?  Read on and find out! *grin*

Tarot cards (that thick pack of seemingly inscrutable – and kinda scary – images) have been a combination of oracle and imaginary best friend to the indecisive and lovelorn since well before the first hippie set up a card table on the Venice Beach boardwalk. What you may not know is that everyone’s favorite divination deck probably started out as an innocent card game.  Because the Season of the Witch is upon us, I thought it might be fun to share a bit about the ancient, dark (and maybe not-so-dark) art of Tarot card reading.

The images are beautiful and iconic: Death on his fearsome black horse, the Fool, blithely about to step off a steep cliff, a juicy red heart pierced by three long swords. Although the richness of these images may suggest that Tarot was always a tool of divination, the truth is that Tarot probably (nobody really knows for sure) started in Italy as an ordinary card game called Triumph. Similar to modern-day Bridge, Triumph enjoyed popularity throughout Europe in the fifteenth and sixteenth centuries. In fact, Tarot/Triumph might still be played by retirees had those pesky occult followers not discovered and adopted the deck back in the 1780s. *wink*  These ‘aficionados of the odd’ saw symbolic meaning in the cards’ images and began using them to predict the future and advise others.

The pack most recognized today is called the Rider Waite deck, but if you want to impress a card reader, call it the “Smith Waite” deck. This will show that you recognize Pamela Colman Smith as the person responsible for all those lush and evocative Minor Arcana images. No decks created before Smith assigned images to the four suits of the Minor Arcana – instead they were just like our modern day playing cards (a series of pips or geometrics).  In fact, if someone gets the ‘heebie-jeebies’ from the traditional Tarot deck, I almost always whip out my magic playing cards and read THOSE instead – it’s a very easy transition.  *grin*

Over the years, various religious groups and secret societies (like The Hermetic Order of the Golden Dawn) re-interpreted the Tarot and designed their own decks accordingly. No matter the design, the pack is divided into the Major Arcana (Death, the Fool, Justice, the Lovers) and the Minor Arcana, which included all the (lesser) numbered suit cards like Two of Wands and Nine of Pentacles. Never fans of subtlety, the Golden Dawn turned up the heat on their pack, adding sexual imagery to their numbered cards. Not only did this change help distance Tarot from more traditional playing cards but, but the evocative images on each card helped establish the Tarot as a fortune-telling tool. The pictures told a clear story, which the “psychics” could then tell to their victims… *ahem* I mean, ‘sitters’ (customers). ☺

Even if you believe all manner of psychics are pure bunk, it’s interesting (I think) to know how Tarot card readings work. There are as many ways to read the cards as there are readers, but over the years, a few traditional spreads and styles have emerged.

Two of the more common reading styles are Question Readings and Open Readings.

Wondering if you should take that new job out of state? Marry the guy with the closet full of embalmed cats? (No!) When facing an important and specific decision, we’d all like a quick peek at a little inside information. The would-be psychic will offer a Question Reading in this case, to address a sitter’s specific concern.

In this case, clients will be advised not to narrow the scope of a question by presupposing a certain response. For example, asking how to get your boss to retire might not be as fruitful as asking how to raise your comfort levels at work. On the other hand, don’t go overboard and ask something so vague the reader has nowhere to start on the answer. Instead of asking, “Is it true love,” see if you can examine the details and dynamics of this budding relationship with Your Pal the Cat Guy.

It’s also important to frame your questions in the positive. Instead of asking why a particular goal has not come to pass, focus on what needs to happen to make that goal a reality.

While question readings are favored by many purported psychics, others opt for open readings. As you may have guessed, these readings aren’t interested in the specifics, and usually focus on generalities like career or love. Many Tarot aficionados read their own cards (sans psychic) as a means of exploring their true feelings and desires. Whether you think Tarot is trivial fun or serious psychic business, self-examination is pretty much always a good idea.   My personal deck is one from my friend Anita – a deck of Animal Medicine Cards, which, while not Tarot per se, are wonderful advisors when I’m super, super stuck.   I like having an unbiased and seemingly-random perspective, and the cards are sometimes oddly accurate, offering a viewpoint I’ve not yet considered.

So now you know a little about those beautiful, strange cards. Some of you are probably thinking, “Hey, Misty, you still haven’t told us how to read the cards! How do I know what the Ace of Pentacles means, really? And, oh, what if it’s upside down?”

People give me the side eye when I tell them the cards mean what they mean to you, but it’s the truth. So many books have been written about Tarot that you could read one a week and probably die with an unread stack on your night table. If you want a book, I think Rachel Pollack’s Seventy Eight Degrees of Wisdom is one of the best (and it’s finally back in print).

If you prefer the Internet, plenty of sites can offer card-by-card analysis. Learntarot.com is free and even has a course on card reading.

First things first: Get yourself a pack of cards. Thankfully, there are dozens of decks to choose from, all readily available on eBay or Amazon (or of course at your local occult shop, should you be lucky enough to have one nearby). Fiddle around with them. The images speak to your unconscious and subconscious, so relax and listen to what your brain has been trying to tell you, and keep an open mind – there may just be a message in there.  *grin*

So do I really personally believe in this stuff?   I *do* have an awful lot in common with the Queen of Swords, and she shows up in my personal spreads ALL THE TIME, but do tarot cards have profound, deep meaning by which an entire life should be run?  My good friend Carol Ann summed up my feelings on it very VERY well, in a single, pointed sentence (and I happened to be recording her at the time!  Lucky you!).  Here’s a clip of her at breakfast one morning expressing our feelings on readings (WARNING: Contains a curse word).  Tell me if you recognize that voice!  (Hint:  It’s usually yelling, ‘HOWARD!’ on a very popular sitcom.)  *grin*

Queen of Swords (until I’m not),
Misty

HBO’s The Last Of Us Clicker Played By Misty Lee